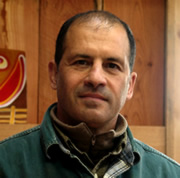 Carlton is a true Plein Air artist who creates his paintings from his mobile studio — a ’95 minivan — using the steering wheel as his easel. Painting in snow, rain or hail, like the US Postman, never discouraged by the elements. Working quickly, he captures the moment, with strokes that are confidently applied. The results are fresh, bold impressionistic canvases. Carlton’s use of colors appears extreme and brilliant, bordering on surreal upon close inspection. They are strong and very intense without being unrealistic. “I tend towards realism, then tweak up the colors,” said Carlton.

It’s a great approach. Carlton simply drives around until a scene or view strikes him — it could be a tree, an old barn, a running brook. His mobile studio takes him to places inaccessible to even the most diehard Plein Air painter.

Carlton has always been an artist, pursuing his talent in an unconventional way since childhood. He was born in Mexico City in 1954 and grew up in a suburb of Cleveland, Ohio. He received a Bachelor of Fine Arts degree from the Cleveland Institute of Art.

In 1978, Carlton enlisted in the army, serving as a helicopter pilot. During his military career, he was stationed at various bases around the world. He painted as a way to record his personal experiences.

Carlton’s work today reflects the images and people he encountered in his travels over the years — a provocative, unconscious synthesis of disparate characters and themes that is best described as a combination of realism and high-energy expressionism. His style is inspired by the work of Winslow Homer and George Bellows. In each of his paintings, Carlton strives to adhere to a creative philosophy based on four elements: color, light, emotion and energy, with the emphasis on bold intense color and action.

Carlton and his wife Ann currently live in the Finger Lakes area of New York. He is now devoted to his career as an artist, working in oil, watercolor, and mixed media. His paintings have been exhibited in shows throughout the country.